It’s fall! The trees are gorgeous, the air smells colder, Halloween is over, we are officially moving toward winter. Which means it is time to eat one of my favorite foods, CHILI!

So what is your secret ingredient? What is the best chili recipe? Do you like it spicy? sweet? with lots of cheese and fritos?

It’s a time of new life.  We were hit with a snow storm last weekend and the grounds were blanketed with snow.  This weekend is Easter and the patches of snow are mostly melted away.  The flowers are coming up and the spring may have finally arrived.

This week I  met a 94 year old lady, who had just learned to read this year.  She shared how lucky kids are to get an education.  She shared about the challenges she had growing up and working hard for low pay.  She worked in a chicken factory taking off the feathers.  But, more, she showed how important it is to keep listening to where God is leading you and listen to him and to keep learning.  Because even at 94, she was not too old to learn something and change for the better.

How are you bringing newness into your life?  What new thing should you learn this year?

Have a Happy Easter!

In Sunday School, we are exploring how to make our congregation more awesome.  A lot of fantastic ideas have been contributed, but my favorite are the ideas on pastoral care.

I think this is the most vital and rewarding place to work.  How can we let other people know how important and loved they are?  What can we do to strengthen the relationships in our community?

This week, we discussed how to best reach out to people when they are absent.  Should we call them?  Send them an email?  Is it better if they are contacted by a friend or multiple people?

What about people who have been gone for a long time?  Months?  Years?  Should we contact them?  I loved the responses here.  Sending them information to let them know what’s currently going on at church.  Updating the website so that they can have a reference to look at.  Sending a survey to see what they are interested in.  Having people who knew them give them a call.

Anyway, exciting stuff is going on and I’m looking forward to seeing the new programs and ideas that will result of this project.  I hope we can harness the momentum and become a really awesome community.

When I was growing up, there was this book my Dad would read called The Monster at the End of the Book.  It was funny and about fear.  It was about how we are often afraid of something happening when we don’t have all the facts.

I’ve been told that most of our pain happens when we are not living in the present.  Most of the time we feel pain it’s because we are worrying about the future or because we are having regret about the past.

There is a quote by Mark Twain:

I’ve lived through some terrible things in my life.  Some of which actually happened.

I think fear naturally amplifies the worst possibilities.  This week, it played out at home.  T was worried all weekend that the kids at school would not like his new haircut.  But, today he had a great day, and they said nice haircut.

So, we should strive to be less worried and afraid and take life as it comes.  :)Mon

Synchronicity – My definition is when you have a lesson to learn, so it keeps coming up in life repeatedly until you finally take a hint.

The lesson in my life right now is Relationships take a lot of work.

There is a song by Justin Bieber of the radio right now, with these lyrics:

But the grass ain’t always greener on the other side,
It’s green where you water it

That struck a chord for me.  I’ve never been especially good at taking care of my friendships and relationships.  They exist and I like them, but learning to take the totally required steps to be a friend instead of just being friendly is an area that still needs growth.

Taking a minute to call someone, or complement them, or bake them cookies.  Or at home, to spend the time interacting with family members, or giving backrubs.

It’s easy to be lazy in relationships, but the rewards of a healthy relationship make life awesome.

Another song, that has a similar message, that I love, can be found here.  🙂

Ok, as a parent, I know fast food is not healthy.  French fries and soda have to be way up there on the list of things that should not be eaten.

But, my kids received gift cards for Christmas and were dying to go spend their loot!  Thursday night, we took a field trip to McDonalds and I have to admit that it was a really good experience.

My son ordered two happy meals.  I told him he could just get one and an extra sandwich, but it was his money, so whatever.  He was so excited to have 2 toys, and 2 sodas, and 2 containers of fries.  He still had money leftover to get 3 cookies.

But, there was another family.  A family that reminded me of my childhood, there were 4 kids.  They were so friendly and rambunctious.  The kind of kids I can let my kids play with without fear that they will tattle because my kids were jumping and bumped into them and they fell down.  The kind of kids that you keep one eye on because the combination of them and your kids has the potential to have someone trying to climb the outside of the playground and having to make an emergency room visit.  You know, kids that enjoy life fully and are not afraid to have fun.

They reminded me of my childhood because there were so many little kids, because they were pretty frugal.  No happy meals for these kids, instead large orders of fries they could share.  And they were home-schooled just like I was when I was their age.

The kids had a blast playing with them.  We learned that one boy was so excited to get a checkers set for Christmas.  We learned that another really liked the happy meal toys and wanted to play with them.  My son showed incredible generocity, not only sharing his cookies and letting them play with his toys, but he also gave away one of his toys to one of the boys.

As a parent, when your kid surprises you with his ability to be compassionate, that is the best thing ever.  🙂

This week. a zen monk told me to take care of myself…  Because it is an important part of my practice.  This is the part of Buddhism, that I find fascinating.  They believe you can become a better person, and you should practice this.  And there are some things that you might need to practice in life, like being nice, or taking care of yourself. That will help you in your journey.

So, this week was tough.  I started the week with a cold.  And as I began to feel better, we received a phone call from the kids birth family saying the kids’ brother was dying in the hospital.  In Chicago.

So, what could we do, we took the kids out of school and drove across Illinois to see him.  He looked terrible.  Very sick.  I feel confident that he is still fighting, and young, and stubborn.  I hope he pulls through this soon.

And, it was good.  The kids got to meet him again.  It’s been at least 7 years since they had seen him before.  I got to see my son struggle to find something comforting to say, something encouraging, to tell him that he hopes he will be better and that he is praying for him.

And now, we will take care of ourselves.  Sleep last night, was so valuable.  Today we are relaxing at the library, our favorite things.  🙂

How are you taking care of yourself today?

So it is the time of year when the days are getting shorter and shorter, its getting darker when we go to and come home from work.  Pretty depressing right!

But, luckily, we have many reasons to celebrate in this dark time.  I think that we as cultures intentionally at some point in our history, put celebrations right at this point in time to have something great to balance out the darkness.

So Christmas, Hanukkah, Solstice, Kwanzaa?  What are you celebrating?  What are your traditions?  How do the holidays help you practice being grateful?

One of my favorite traditions is baking povitica, a Russian bread, that we make at the holiday time.  The smell is wonderful, and waking up early to eat a warm slice on a cold morning is a great memory that we renew every year.

We went Christmas Caroling this weekend, and a weird thing happened that I’m still not sure how I feel about it.

We were at this house singing Jingle Bells, and we finished and the lady said it was nice, but could we sing a Christmas Carol instead. She was quietly asking to hear a song about Jesus.  So we met her needs.

But, for me, the idea of giving to others, seeing their needs and helping them out fits beautifully in the celebration.  The Jesus story, Santa, trees, lights, it’s all Christmas.  It’s about sharing, generosity,  love, joy, family, friends, mystery, and impossibilities.

But, it was really fun, the weather was perfect, and we had a fantastic group of singers.

What is your favorite Christmas tradition?

I have a friend who often uses the phrase First World Problems.  I think he is right.  So often, we think we have a real problem, when in reality this is nothing and could not be more insignificant.
Example, this morning, I arrived at work early and the elevator was locked in the parking garage.  I had to walk all the way to the front entrance to get in.  Sometimes things like that can piss us off, but in reality we can just as easily be grateful that we have  a job, that there was a door open, that we could go get a cup of coffee instead, there are so many options.

Did you have a first world problem today?  How does perspective help you be more grateful? 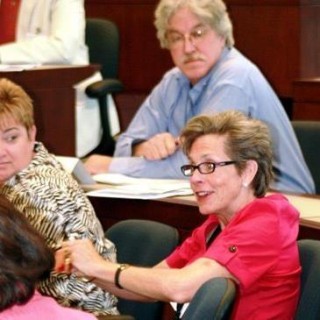 Jerry Van Dielen is an IT professional in Saint Louis.